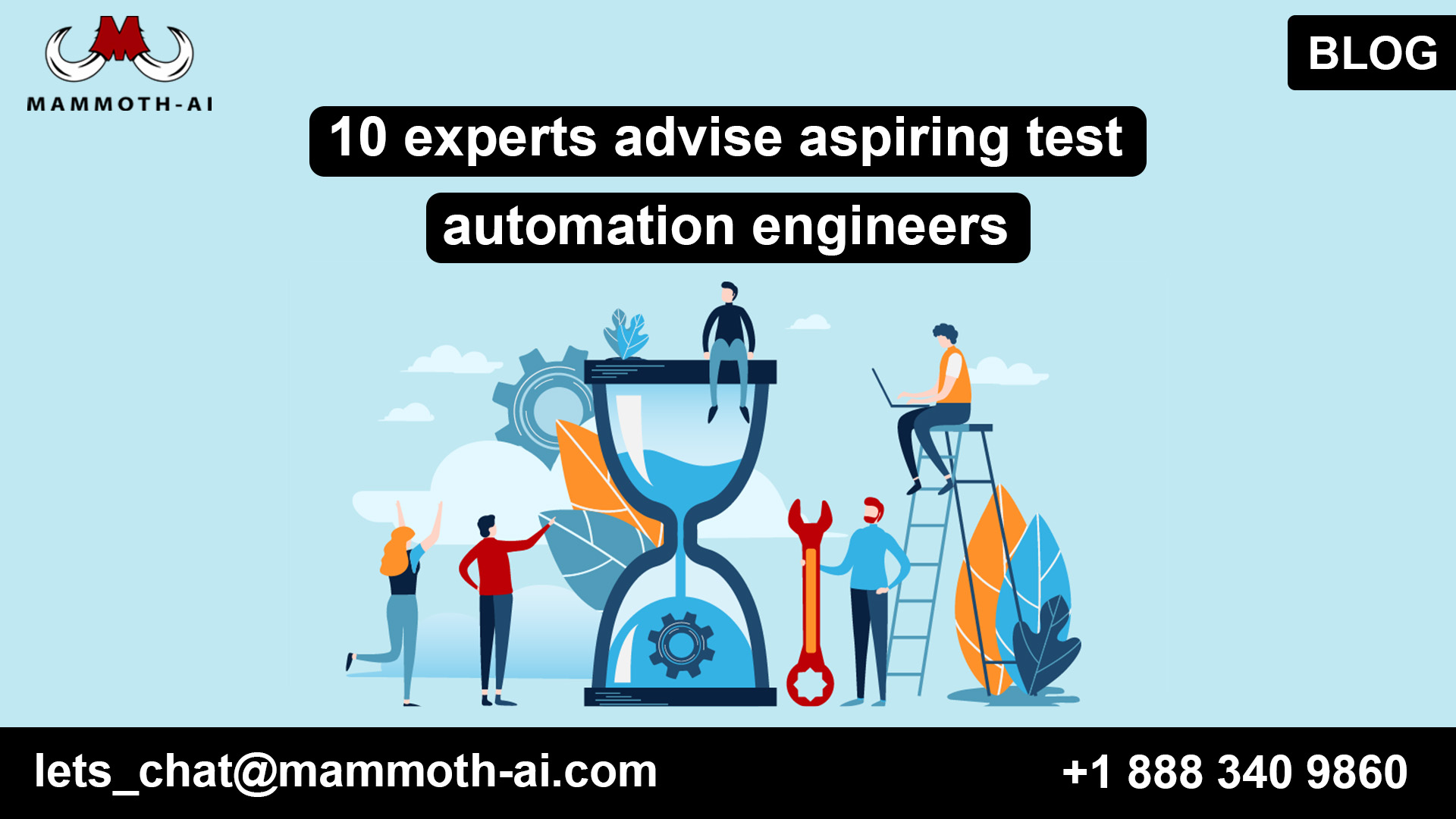 If you ask ten test automation professionals for advice on how to get started (or improve your work), you’ll probably get 12 different replies. We know because we asked for particular websites, books, videos, and other resources to study, rather than generic, nonspecific suggestions like “Learn to code.”

We produced this short guidance based on the findings of that informal poll, with the goal of assisting human, interactive testers in developing software that can independently probe other software and deliver meaningful, accurate answers.

Test Automation University was recommended by seven of our ten experts. This free website is comparable to MasterClass, Skillshare, or Coursera, however, it is only dedicated to software test automation and is completely free. We also asked if they had any other resources they wanted to provide, such as a list or just advice on how to get started.

Their advice for prospective test automation engineers is as follows.

How to get started: “Some individuals overdo it when it comes to programming. To write automation, you don’t have to be an expert. There is no magic bullet that is code-free, but you may just need to know how to understand code in the future.”

“For tests, you only need to write a few lines of code. You’ll need to be able to write tests with Java libraries and other tools. It’s a divisive topic right now, but as AI becomes more prevalent, we’ll see less dependence on rigorous coding. In the future, people will be more interested in data science and testing.

“The frameworks are so simple to use since you’re already working with existing code. It’s not like you’re starting from scratch all the time. What you truly need are the fundamentals. At GE, I became a test automation architect, but all I needed to do was know enough to get things to work.”

He made our list of 33 test automation professionals to follow on Twitter because he is a consultant who focuses on educating and is well-versed in Selenium and Java.

“I’ve read this book several times, and each time I reread it, new nuances emerge. Kent Beck discusses the advantages and disadvantages of several techniques, as well as when he may select one over the other, promoting decision-making and code ownership.

“I streamlined my coding approach and lowered my dependency on external libraries after my first reading.” Implementation Patterns is one of the few books that describes the decisions that go into ‘developing frameworks,’ which is a critical ability for anybody interested in automation. I’m going to go back and reread it.”

Grossman is a versatile tester that has worked with a variety of technologies, including Selenium Java, HP tools, and testRigor for natural-language processing.

Website: Want to learn Java (or 22 other languages) but also like to play games? Grossman recommends using Codingame and helping Batman save Gotham from the evil Joker with your programming skills.

Repositories: Need to learn to write xPath or CSS? Stop by the diners, in CSS or XPath.

Martin has spent over two decades in software testing, the past ten years as a primary test Automator at Broadcom, leveraging automation to address challenges. Martin, who is not a coach or trainer, has worked in automation for GE, Symantec, and other companies, so he has a lot of hands-on expertise with the finest technologies.

“I am now a Robot Framework fanatic, and it all began with completing a course by Bryan Lamb; it is available on several platforms, but I purchased it on Udemy.”

“That course paved the way for me to go from having no expertise with Robot Framework to automating thousands of test cases in about two weeks, and what has since grown into a robust test automation framework at my firm with over 40 contributors.

“That, if I had to name just one resource, would be it.

“Since then, I’ve turned to the official Robot Framework website for all of my automation requirements. Robot Framework is capable of completing any task. Robot Framework, in my opinion, combines all of Python’s (or Java’s) capabilities with all of Selenium’s strength in a single test automation framework. It’s what I use to test browsers, APIs, cloud-based interfaces, terminal interactions, databases, and even performance.”

Pip specializes in the Java/Spring/TestNG/Selenium family of test automation and is one of the leading testers in Romania (strike that—one of the leading testers in Eastern Europe). Her blog delves into these subjects, and she just produced an Intelllij training lesson on test automation. Surprisingly, she did not provide one of these resources for getting started, maybe owing to her modesty.

“Thanks for reaching out on this issue; it’s an excellent one,” says the expert. I’d suggest the Test Automation University website, which I’m sure many others would as well. It’s a wonderful place to start if you want to learn about automation because there are courses on a variety of technologies and frameworks dedicated to developing it.

“There are also classes on relevant technologies you’ll use in the automation process, such as the IDE for creating tests, the version control system, and continuous integration tools. If you’re not sure which courses to take or in what order, go over the suggested study routes. The courses are designed by specialists who are well-known and well-versed in their fields. Let’s not forget that all of the courses are completely free to anyone who wants to take them.”

Fortner works as a senior solutions architect at Sauce Labs, where he assesses and improves clients’ automation methods. He is credited with inventing, popularizing, and calling the Dom-to-database approach of test automation.

Titus Fortner may be found on LinkedIn at https://www.linkedin.com/in/titusfortner/.

Getting Started Advice: “To new testers, I recommend Ultimate QA. Beginners may learn from the website’s articles and video lessons, while expert testers can benefit from the information as well. The training material continually focuses on the aspects of each given topic that I feel to be the most relevant. This is most likely due to the content being based on real-world experience in a variety of settings.”

Stewart has worked at Google, Facebook, Apple, and Thoughtworks, and is the developer of Webdriver, the basic engine that would become the Selenium 2.0 (and subsequent) browser-driver.

a book “Michael Feathers’ book Working Effectively with Legacy Code. This is one of the few books on software development produced in 2004 that is still relevant and contains lessons we can apply today. The characterization of legacy code as “code without tests” is ageless, and the suggestions on how to bring a code base under control is excellent.”

Visit the following website: “The Ministry of Testing is also a fantastic community. They put on some fantastic gatherings and are some of the most genuine and welcoming individuals you’ll ever meet. Richard Bradshaw has been the community’s ‘Boss Boss’ for quite some time, and it’s been amazing to watch it flourish. The Slack channel is a terrific area to connect with like-minded people, and the recordings of previous presentations are usually fascinating. I haven’t gotten a chance to look at the courses they offer, but if they’re anything like the rest of their community work, I have great expectations.”

Slackness: “Finally, the Selenium Slack channel is a terrific location to connect with other Selenium users. There is a pleasant, active community there that can frequently give advice and assistance. Better yet, the core Selenium team, as well as other members of the ecosystem, such as Michael Mintz, the inventor of SeleniumBase, are all present and frequently contribute to discussions where it is useful.”

The Netherlands is recognized in Western Europe as a software testing sanctuary, however, most of that is exploratory and human testing. Dijkstra is a test toolsmith and teacher who has recently specialized in API and service testing.

“Arnon Axelrod’s Complete Guide to Test Automation” is a book written by Aaron Axelrod. This is one of the greatest test automation books I’ve ever read. It covers not just ‘how’ to utilize certain technologies, but also ‘why’ you should automate and ‘what’ to automate. It’s a must-read for test automation engineers, managers, and team/tech leads alike. This book’s technical reviewer was me.

The second book is: “Katrina Clokie’s A Practical Guide to Testing in DevOps. There’s a lot of useful information here for modern testers and test automation developers. As more teams and enterprises move toward CI/CD and DevOps, the role of the tester shifts as well. This book offers a wealth of advice on how to succeed as a tester in today’s software development environment.”

McNeely, an engineering manager at Expedia, has spoken at the Association for Software Testing Conference and volunteers for Veterans for Quality, an organization that helps veterans transition to software testing.

“Pretty much everything by Alan Richardson is quite valuable,” says the author. I found Java for Testers to be a useful resource when I was learning to develop tests in Java—the language in which the product was created. It filled in some holes in my knowledge and helped me to better understand how to develop and arrange tests. Furthermore, I found the book to be instantly useful, with examples and patterns that were clear, brief, and immediately applicable.

“Later, as I progressed in API automation, I discovered that Automating and Testing a REST API achieved the same thing for me in terms of API testing. I presently sponsor Alan on Patreon, and for only $1 a month, he provides a wealth of testing instructions and blogs.”

It’s difficult to come across a copy, plus it’s a little out of date. Crispin’s book Testing Extreme Programming, however, is widely regarded as the first to treat testing beyond unit tests as a major aspect of agile development. That was in the year 2003. Crispin has remained involved in the agile software development community since then, co-authoring Agile Testing: A Practical Guide for Testers and Agile Teams, as well as More Agile Testing, the next book in the series.

Getting Started Advice: “Surprisingly, I’m now working on regaining enough coding and automation abilities to work with my team on both coding (test-driven development) and test automation. As a starting point, I’m taking a LinkedIn ‘Intro to Ruby’ course, and I’ve also hired Avdi Grimm to educate me. Of course, I’ve published a lot on the subject, which I frequently suggest to others, focusing on how a delivery team as a whole may come up with a test automation approach.”

There are a few things you should know about testing automation if you want to learn more. You won’t go far until you have the right tool or programming language. Then there’s the matter of comprehending testing, the computer’s limitations, and the hard-won patterns that allow you to delegate part of the monotonous testing labor to a machine.