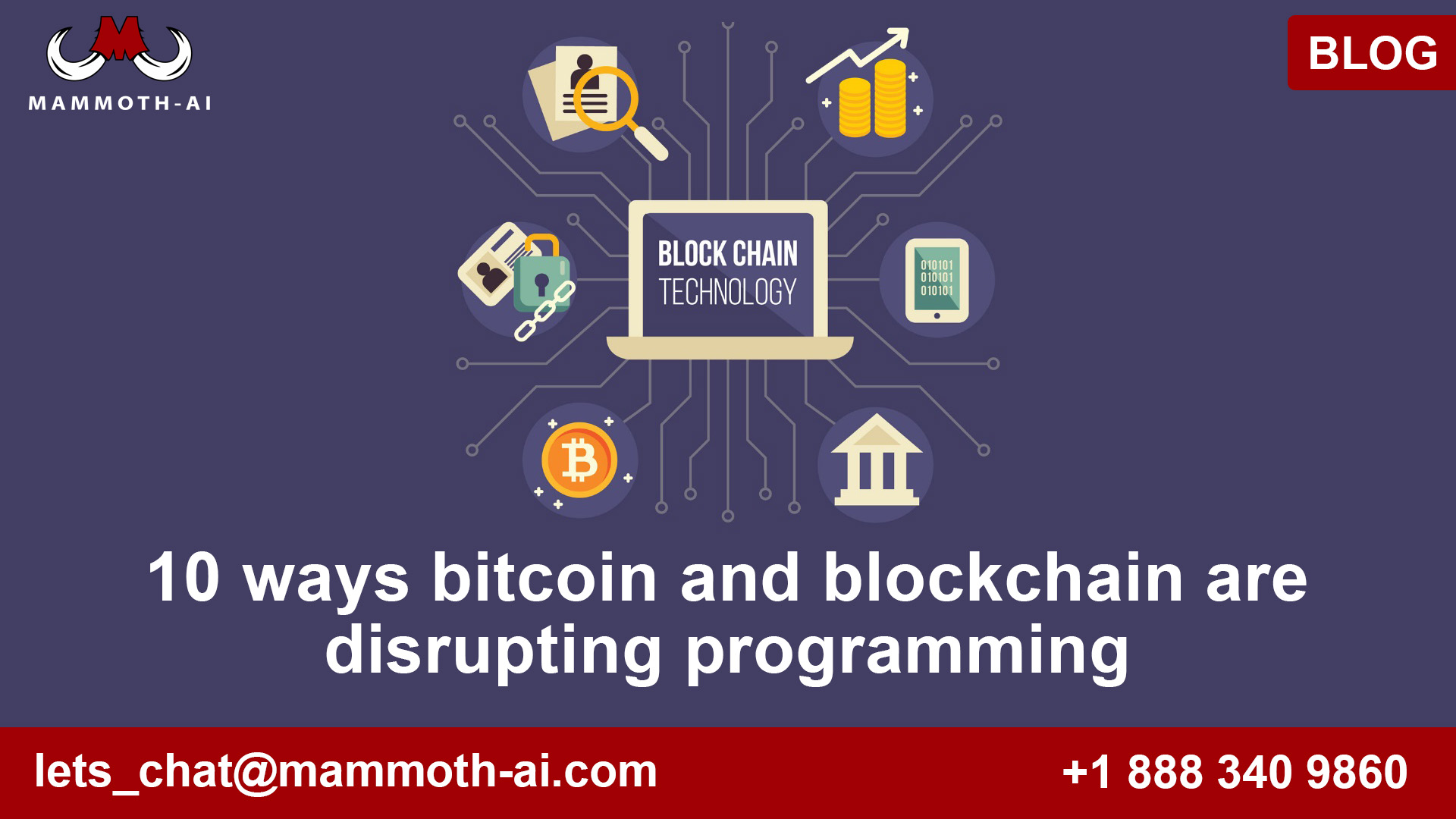 For the most part, blockchain has been regarded as the crazed uncle from the other side of the country who visits every other Thanksgiving. He’s wealthy sometimes. He’s a bit of a scrooge at times. He occasionally rails against Washington’s corruption. He occasionally tells stories about his gang of guerilla coders who are laying the groundwork for the future company. He could be insane. He could be correct. He has the potential to be both.

When you delve deeper into the realm of blockchain and bitcoin, though, you’ll discover that it’s more than just a complicated stew of money, politics, and power. The new technology is changing the way we program computers.

The necessity to protect against fraud and maintain a reliable source of truth across a hostile Internet has pushed programmers to tackle some of the most difficult problems in the field. The solutions aren’t perfect, but they’re close enough to make us reconsider how we construct all of our systems.

Here are some ways that blockchain is teaching us how to develop software in new ways.

We haven’t worked out the best approach to design algorithms that allow many machines to function nicely together despite the fact that the Internet is nearly forty years old. They can tackle problems that are easily divided into segments, but deeper difficulties like agreement and decision-making are more difficult to resolve, especially when hostile actors are present.

One of the first major efforts to discover a mechanism for opponents to collaborate is the blockchain concept. They must collaborate to get an agreement on who owns which coin, but they must also verify because trust cannot be presumed.

Many previous solutions relied on establishing a single source of truth, which was a perfectly competent answer, but one that came with far too many risks of corruption and power abuse. The race to establish a reliable blockchain is forcing programmers to confront the most difficult challenges of power distribution and, perhaps, building a more equitable world.

2. Programmers must be more careful

Software development has always necessitated caution since bugs, especially minor, unforeseen ones, can cause errors and crashes. Most errors can be fixed by simply restarting the code or resetting the system when the stakes are low.

However, blockchain programmers frequently deal with money, which provides a strong motivation for hackers to trawl through software seeking for flaws to exploit. Active attackers are far more harmful than the kinds of random errors that cause conventional programming to malfunction.

The bug-related losses at larger exchanges and enterprises, such as decentralized autonomous organizations (DAOs), have been significant. The creators of the various blockchain languages place a premium on accuracy and make decisions that encourage programmers to be more cautious.

3. Languages are getting simpler

Simplifying languages by removing all the smart constructs that make them tougher to evaluate is one of the simplest bug-killing tactics. Yes, programmers have requested these extra tools over the years, but when the only stakes are games and web pages with cat videos, experimenting with neat syntax tweaks and preprocessors is OK.

Simpler approaches are preferred by blockchain developers since both the programmer and the code reviewer are more likely to comprehend the code completely. As a result, there are fewer defects and the code is more stable.

Will these concepts find their way into the mainstream? As blockchain-based data structures become increasingly common, programmers will adopt this straightforward aesthetic. Is it going to stick? We’ll have to wait and see.

Most programmers avoid the hassle when the stakes are minimal. Proving the code to be accurate has always been a passion for the most mathematically-inclined coders. Building a logical argument for the software’s validity is more appealing when money is involved and active hackers have a greater incentive.

Programmers are relearning the teachings emphasized by theorem-obsessed mathematicians with the aim of eliminating flaws from their code.

Many C programmers want to brag about how powerful their language is. They, as well as fans of other languages, are correct. Blockchain algorithms can be written in almost any language. Serious blockchain engineers, on the other hand, are opting for newer languages that place a greater focus on correctness, propelling the industry forward in the direction of more accurate and trustworthy code.

As blockchain-based algorithms expand their applications beyond cryptocurrencies and digital contracts, interest in these innovative languages, as well as the ethos of bug-free coding, will grow.

6. The syntax is less important

JavaScript developers can use ECMAScript or one of the many variants such as CoffeeScript, Coco, LiveScript, and Caffeine to write their code. However, whatever they write will be preprocessed into plain old ECMAScript.

The changes are mostly syntactic, and it appears that they exist primarily because some individuals don’t enjoy typing semicolons with their pinkie fingers. (More advanced preprocessing alternatives, such as TypeScript, add more useful features like type safety.)

Blockchain programmers are less concerned with a language’s syntactic sugar covering and are more interested in learning how code is translated into the instructions that are eventually executed by the blockchain virtual machine (VM).

They’ve got to be. Errors and omissions can easily seep into software during the conversion from high-level code to VM instructions. Concerns about attackers and security are prompting developers to focus more on how the code really executes and less on aesthetic issues like tabs and spaces.

On the internet, encryption is commonplace. This material is most likely being read in a browser that has received an encrypted copy via the HTTPS protocol.

Digital signatures, on the other hand, add an extra degree of protection by tying a transaction to the person who controls the private key. Because the private key could be stolen or lost, the method isn’t ideal, but the algorithms provide some assurance that a certain person was responsible.

These digital signatures have long been used in several code platforms, particularly in the distribution of software on mobile phones. Regular developers should consider adding some digital assurance and keeping a secure log of everything that changes as a result of blockchain.

Although Git was not designed to be a blockchain, it is strikingly comparable. Each commit to the tree is not required signed with a full digital signature, but it is sealed with the SHA1 hash algorithm, which is cryptographically safe. Although this hash function will not link the commit to a specific individual, Git version 1.8.3 added a feature that requires users to sign their commits with a digital signature.

Git also doesn’t provide an unbreakable chain of commits, in part because developers frequently rebase and merge their code in complex ways. It’s still a young example of how assurance may help with data history. The ability to turn the amps up to 11 is now possible thanks to blockchain.

The transaction log is often hidden from the user in most SQL databases. They keep track of all transactions in a single, reliable log file, which they then use to recover from crashes and assure consistency. Most SQL developers, on the other hand, will be unaware that it exists because there is typically no API or means for the normal programmer to communicate with it.

For both openness and security, the blockchain world offers the way to these secret logs. Users may easily follow the history of any currency from the moment it was produced thanks to websites. The transaction flow is studied by scientists in order to have a better understanding of the marketplace.

It’s a different perspective on data history. We still have no idea what programmers will do with this feature.

10. We are decentralizing the Internet (again)

When the Internet initially started, it consisted of hundreds, thousands, and eventually billions of machines, all of which were first-class citizens capable of sending and receiving packets. Technically, this is still true, although some machines are now more equal than others.

The majority of our Internet engagement is dominated by hubs such as webmail sites, eCommerce websites, and, especially, social media sites. When older protocols (SMTP, FTP, HTTP) couldn’t keep up with the bad bits like spam, they earned this role by offering a better ordered and secure passage for bits. They essentially consolidated the majority of power and control on the internet.

Putting the trust back in the machines

Blockchain begins to return us to a world without trusted intermediaries who may or may not fulfill their obligations. It returns control to our computers, whether we are mature enough to deal with it or not. Another layer of trustworthy middlemen is already assisting in the storage of our currencies and the negotiation of our contracts; thus, this could be temporary. But it’s a welcome return.