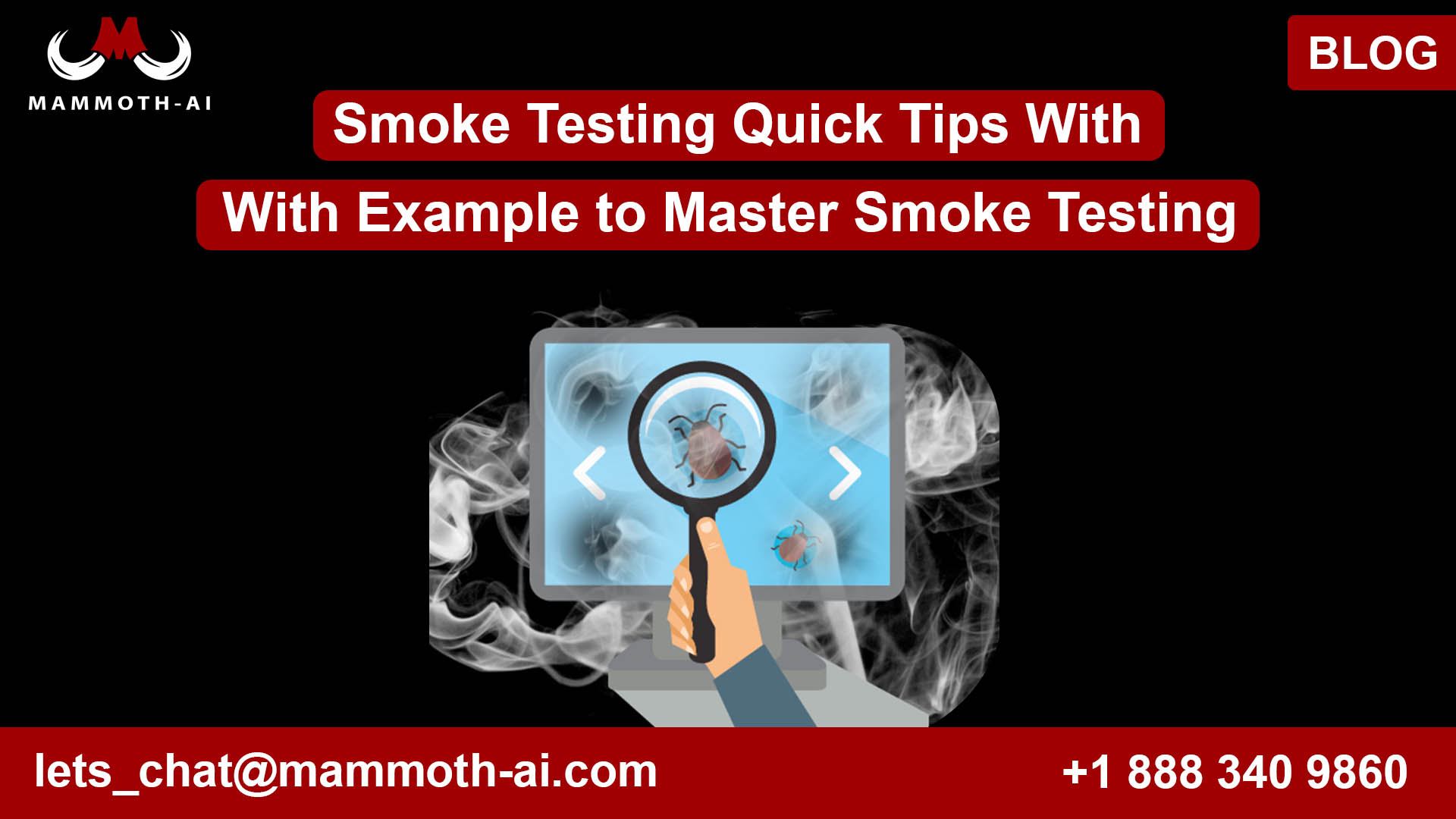 “Smoke testing” is a sort of software testing in which the most critical functions are checked to guarantee that they function properly. Smoke testing, also known as ‘Build Verification Testing,’ consists of a series of non-exhaustive tests that ensure the structure is stable enough to be tested further.”

Smoke Tests are my favorite among the many various types of software testing techniques available.

You might be asking why I choose Smoke Testing over anything else.

This article will explain why.

But first, let’s review what smoke testing is all about. Then, to make the most of your smoke test efforts, we’ll go through some popular tips and tricks.

What is Smoke Testing?

This statement very much sums up the purpose of a smoke test. Smoke Tests are a type of basic, non-extensive software testing technique in which you run the code you’ve written so far through basic, ‘happy path’ use cases to see if it breaks.

If it does, you should return to repairing the system because it is not yet ready for more thorough and scientific testing. And if it doesn’t, you know you’re on the right route and that the system’s core features are operational.

That, my friend, is smoke testing in a nutshell. It’s as simple as running a rudimentary series of happy path tests on the product you’ve produced so far at any given time.

“It’s As Easy as Putting the Product Built So Far Through a Rudimentary Series of Happy Path Tests, At Any Given Time, To Help Bring Out the Simple Yet Critical Bugs.”

Smoke tests are used to ensure that the most important functions are working (and that they are working quickly). The project team can move forward once they have a level of certainty about the basic but fundamental functions of a product or system.

Smoke testing is a sort of preliminary software testing used to determine whether or not a piece of software is stable. It is a subclass of test cases that tries to evaluate the software’s essential functionalities. This determines whether or not the build is reliable enough to run more extensive tests on.

Smoke tests may also refer to a set of tests performed on each new version of software to check that it functions properly before the testers apply their other testing techniques.

This form of testing is typically carried out by hand, although it can also be automated. When the software build is finished, it is forwarded to the QA team, who will test it for important functions. If the tests fail, the issue will be forwarded to the development team for resolution. Pre-recorded tests run on the build and record if the functions operate or not through automated smoke testing.

Why is Smoke Testing my favorite?

Because of its intrinsic simplicity, software testing is a simple process. You can effectively test and bring out the most devastating of flaws affecting a piece of code in 30 to 60 minutes. Without having to wait for a lengthy testing phase, the developer may rapidly return to their workstation and begin fixing the errors.

“You Can Effectively Test and Bring Out the Most Impactful of Bugs Ailing a Piece of Code in A Short Span Of 30 To 60 Minutes.”

And here’s the kicker: Smoke Testing is something that anyone can accomplish.

Can be a tester, a business analyst, a project manager, and, most importantly, a developer. As a result, you won’t have to wait for a test phase to be scheduled or for testing resources to become available. You’re almost ready to undertake smoke testing if you know how to use a computer or a mobile device.

Let’s dive in and look at some cool ways to master the smoke test and maximize the value you receive out of it now that we’ve established the fundamentals.

That’s very self-explanatory now. Smoke tests, by their very nature, aid in the detection of easy-to-find but crucial defects that obstruct your team’s development. And such challenges are most common in the first few Sprints of a project or in the early stages of developing a new product.

Other testing methods that can deliver more value at the later stages of product or project development are available to you. There will be more on this later.

#2 Record all your smoke tests

Again, there isn’t much more I can say to explain. Keep track of your smoke tests. It’s an excellent idea to do so. It will also give you with accurate information. The benefits of recording will be explained in Tips #6 and #7.

#3 Smoke tests should be quick – less than 60 minutes at most.

Smoke tests are designed to discover issues that stymie development progress during the early stages of a project. Your goal should be to get the developer back to work as soon as possible, without having to wait for lengthy testing phases.

“Your goal should be to get the developer back to work as soon as possible, without having to wait for lengthy testing phases.”

Smoke Tests should last no more than 30 minutes – and no longer than 60 minutes. You can be certain that something is wrong if you wait any longer. Either your code is of poor quality, or your test cases are too complex.

#4 You can conduct Smoke Tests every day, every sprint, every release

That’s all there is to it. And it all depends on how much and how quickly you add ‘new’ features to your product. If you’re working in an Extreme Agile setting with Continuous Integration and DevOps, you can run as many smoke tests as you like.

The frequency with which you can add significant new features to your product is the most important predictor of your smoke testing frequency.

Sanity Testing is a distant cousin of Smoke Testing. Sanity Tests, on the other hand, occur slightly later in the product lifecycle and serve primarily as a safety net to ensure that anticipated upgrades and problem fixes have been implemented as planned.

Sanity Tests, as contrast to Smoke Tests, have a considerably narrower scope and occur later in the project or product lifecycle. If you want to learn more, click on the link above to read more about the differences.

90% of your team is probably engaged on initiatives that add new features to or change an existing product. They, as well as you, can greatly benefit from keeping a test case repository.

This can be as simple as recording test cases as you go and organizing them with regular reviews to ensure a lean but thorough repository exists to pull upon on Agile or Extreme Agile projects.

Test preparing becomes a snap once you’ve done this. Without having to go through the lengthy and hard process of building new test cases from start, you can simply ‘subscribe’ to the relevant test scenarios and test cases under them.

‘Wherever possible’ is the important phrase.

I’ve already discussed the advantages of effective Case Management. As well as automation. When combined, good Case Management and enough automation can help you complete basic testing up to 50 times faster, saving your team a significant amount of time in the long run.

“You Don’t Have A Cat In Hell’s Chance Of Going Through A Productive Test Cycle If Your Code Fails The Most Basic Of Tests, If The Most Fundamental Journeys Cannot Be Completed Easily.”

Before putting your code in front of testers, smoke tests can assist you perform a rapid sense check of its quality.

This has already been discussed. It is still worth repeating.

Smoke Tests allow you to ensure that the most basic but crucial functionality is working before moving forward – whether that means developing more code or passing the project to testers for in-depth testing.

Traditional, exploratory, and other tests can be used for more complete tests.

Smoke tests don’t take into account a product’s finer points. If you want to make a system practically bug-free, smoke tests aren’t the only way to go.

#11 Anyone can perform smoke testing

That’s what makes Smoke Tests so appealing. It’s something that everybody can do. Smoke Tests require very little planning and execution effort, but they can deliver a surprising number of benefits in terms of speeding up effective problem fixes.

“You Are Performing Smoke Testing in Many Cases – You Just Don’t Call It That.”

Before releasing a build iteration for testing, a developer can perform smoke testing. You can catch the most frustrating but easy-to-fix errors by testing the most crucial functionalities before sending the code to the testing team. This allows testers to focus their abilities on catching the more difficult bugs.

When your company uses Continuous Integration and DevOps, Smoke Tests come in handy. In many circumstances, you are performing Smoke Testing; you just don’t call it that.

Smoke tests are a simple, basic, and very effective way to accelerate your bug-fixing efforts. Smoke tests can be used in software projects by developers and others, and they can drastically enhance code quality.

Smoke Tests should be considered a typical part of any software testing procedure. It will benefit your team more than not having it.

In the comments box below, provide your thoughts on smoke testing and provide some examples of smoke tests.