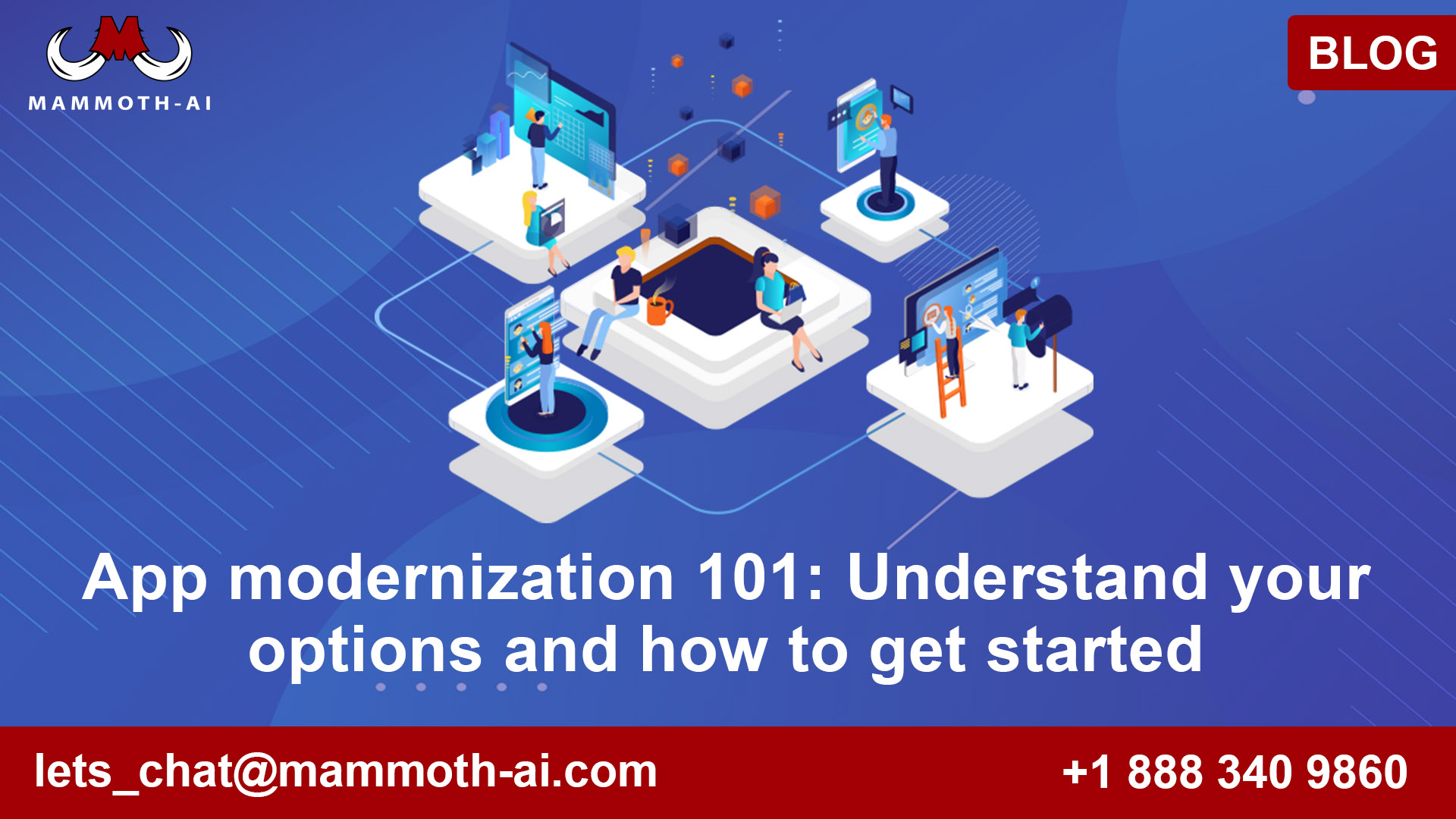 Organizations require optimal performance from their essential business applications in order to effectively develop, compete, and differentiate themselves. This is especially true in the digital transition era.

However, many businesses are still using old systems that don’t necessarily play well with current technologies. If this describes your company, it’s time to look into application modernization.

The act of replacing or updating existing applications and the platforms they operate on with newer features and capabilities that better correspond with current business needs is known as application modernization.

This can be accomplished by rewriting the code to add desired new features to older systems and software, replacing the older system in a rip-and-replace procedure, or rehosting the applications (moving them off the mainframe).

The choice may appear straightforward, but it isn’t always so. “After all, no two applications are the same, and the requirements for change are many and varied,” wrote Derek Britton, Director of Application Modernization and Connectivity Strategy at Micro Focus. “Functional improvements, new user experience, integration with other apps, new data feeds, new access points, new architectural or object/service models, new delivery toolchains… the list goes on.”

Rebuilding apps entails rewriting pieces of them from the ground up while keeping the original scope and standards in mind. The process of rearchitecting an application is when an organization changes the original code to gain access to a new application architecture with more desired capabilities.

Refactoring an application is when a procedure restructures and enhances existing code without changing its exterior behavior.

Rearchitecting is known to be risky and expensive, yet it will yield excellent benefits. For instance, modern COBOL technology is available, which has various features aimed at making updates to original applications easier and faster. As a result, updates to the original COBOL code can be made quickly.

As the name suggests, this solution totally replaces the previous program with a new one that is more suited to an organization’s current business needs. The idea conjured up is of pulling off a bandage in one swift motion.

If economic factors, rather than technology, are driving the endeavor, an organization may soon decide that total replacement is too hazardous and expensive and that the required technological changes will not be achieved anyhow.

Rehost/replatform (move of the mainframe)

Rehosting simply refers to the process of moving an application to a new infrastructure, whether physical or virtual, without affecting its code or functionality. Replatforming an application is when modest changes are made to the original code or application features in order to transfer it to a new runtime platform.

One of the key concerns when migrating any program to the cloud is data security, especially when essential business process apps are entrusted to a third party. Many businesses may not be ready to go on this trip.

Steps to start the journey to application modernization

Here’s how you can put them into practice.

Take stock of your applications and their value to the organization

The best way to get started with an application modernization strategy is to conduct a full application assessment, which includes a list of all applications, their expected ease or difficulty of modernization, their value to business processes, and, perhaps most importantly, their role in customer experience.

The first apps to be tackled should be those that have been assessed to have high value and low modernization effort. Some approaches to modernization do not entail an all-or-nothing strategy for high-value applications that are assessed to be difficult to migrate.

It’s crucial to remember that many programs don’t need to be totally rewritten from the ground up if a corporation decides to upgrade them. Instead, the company can upgrade the basic “DNA” of an existing software application to better meet contemporary business objectives.

Rewriting existing COBOL code in a more current and user-friendly language, such as Java or C#, is another option. In order to make modifications to COBOL, it is frequently essential to isolate the business functions from the rest of the program logic, which programmers know is not an easy operation. A microservices strategy allows a company to break down a program into individual functions.

Modernizing COBOL applications and training programmers to utilize current COBOL as part of their overall development environment is one way for firms to avoid costly and often disastrous rewrite attempts.

Cross-training those already familiar with Java or C# in older languages like COBOL or PL/I systems is “a pretty straightforward and cost-effective approach, compared to recruiting and training mainframe personnel experienced on legacy technology,” according to Micro Focus’ Britton.

If mainframe technology is made available to this new generation of IT workers in the same manner that another technology is, using currently integrated development environments, “embracing agile development methodologies becomes not only possible but also very simple.”

COBOL may be associated with dead languages among younger IT workers, but Mark Conway, a director in the Micro Focus CTO Office, says COBOL isn’t going away anytime soon.

It doesn’t make sense to constantly rewrite things since “rewriting isn’t the highest value of our software developers’ intellect,” according to Conway. COBOL can run directly on.NET and Java platforms and compile to respective byte code representations, and it supports many of the features of C# and Java.

Conway wrote, “This allows in-process language mixing, as well as the ability to naturally exploit the power of these ecosystems.” “COBOL is not the island you may believe it to be.”