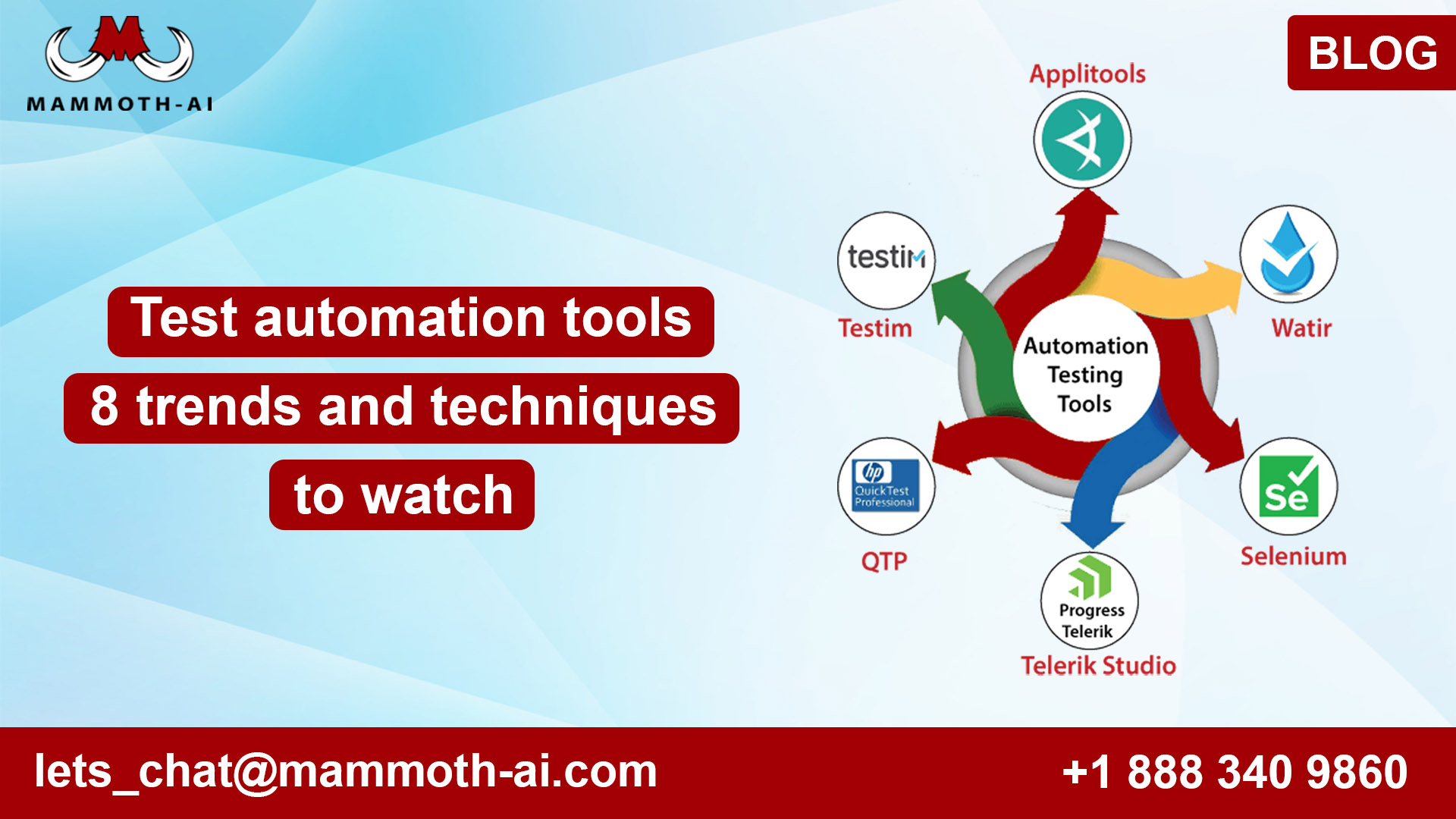 According to The World Quality Report 2020–2021, enterprises must fully utilize smarter technologies to reap the benefits of test automation.

More capabilities based on artificial intelligence (AI) and machine learning are included in smart tools (ML). These are the trends to watch this year, according to experts, along with the expansion of JavaScript-based testing tools, more API testing, and a greater emphasis on skills.

Here’s what you need to know about the current status of test automation technologies for your company.

1. The use of smart testing tools will rise

According to Diego Lo Giudice, vice president, and principal analyst at Forrester Research, “one of last year’s forecasts that are happening today is the greater usage of AI and ML in testing tools to make test automation simpler.”

“The general expectation was that developers would assume control of testing. Developers, on the other hand, despise testing. We can assign them some testing, but other personas, such as the business testing persona, are in charge of the remainder.”

While hopes for the benefits that AI and machine learning in testing may bring to quality assurance remain high, and usage is increasing, the World Quality Report highlighted that there are little indicators of considerable overall progress:

“This is partially due to a lack of essential skill sets, and partly due to the introduction of the COVID-19 epidemic, which has upset schedules, finances, and plans. Nonetheless, interest in AI hasn’t waned, and enterprises are prioritizing AI when looking for new QA solutions and tools.”

The reason for this is that smart technologies will boost cost-efficiency, decrease the need for manual testing, cut time to market, and aid in the creation and maintenance of continual quality improvements, according to the research.

According to the paper, new machine learning approaches are being used to estimate the scope of ideal automation tests, with the objective of “reducing the exponential rise of test scripts.”

The use of AI-based, self-healing scripts to automatically adapt scripts during runtime in the event of object and page element changes is another novel automation approach, according to the paper.

Although more products have AI capabilities, acceptance has been slow, according to Malcolm Isaacs, a Micro Focus testing advocate. That, however, is about to change.

“We’ve arrived at the stage where I believe we’ll take off. Up until now, the toolset we’ve had allowed for a certain level of AI-based automation. But now is the stage at which we can bring it into the mainstream—finally, it’s production-ready.”

According to Nikolay Advolodkin, CEO and senior test automation engineer at Ultimate QA, one of the most notable trends in 2021 will be the rise of JavaScript-based testing tools like Jest, Cypress, Puppeteer, and Playwright.

“All of this technology that readily connects with your software development techniques just lowers the barrier of entry for developers or even testers who simply enter and begin testing the code.”

Another issue, he says, is the close integration of application and testing code. “In JavaScript, you can do things like write unit tests or component tests,” Advolodkin explained. “However, if you run into testing holes that neither of those solutions can solve, you can start utilizing things like system tests with Cypress, which is simply another extra tool inside your JavaScript repository.”

3. The use of Cypress is set to expand

Cypress, an end-to-end testing tool for browser-based programs, is becoming more popular as JavaScript becomes more prevalent, according to Advolodkin. Cypress’ feature set is also a positive. According to him, the solution includes browser automation, API automation, and component testing for React web apps, among other capabilities.

“As a result, it covers numerous layers of testing apps, whereas many other tools focus on a single element.”

Selenium and Puppeteer are just for browser-based front-end automation, so if you want to start testing APIs or components, you’ll need to have all of their products. “All of that is in Cypress,” he replied.

4. The need for API testing will continue to grow

Because APIs are used to share information across the Internet of Things (IoT) devices, it’s vital to evaluate the APIs of IoT-enabled devices to guarantee they’re safe, according to Advolodkin.

“As more of the world connects our gadgets to the internet—we now have smart thermostats, Alexa, smart light bulbs, TVs, and everything else—it becomes increasingly vital to test such products. And we evaluate them utilizing APIs rather than browser-based techniques. That, I believe, will be significant.”

5. NLP-based automation tools are under consideration

Natural-language processing (NLP)-based automation techniques tend to be acceptable to the QA community. According to The World Quality Report, they give benefits such as scriptless automation, model-based testing, the use of plain English statements to produce scripts, and a thinner learning curve that allows diverse project stakeholders to participate in automation efforts:

“Self-healing skills, for example, will become more common over time, but there is little doubt that they represent the future of automation. While the promises are exciting, we recognize that these automation technologies are not yet fully developed.”

Everyone speaks about self-healing, according to Lo Giudice of Forrester, but the fact is that it hasn’t arrived yet.

Despite the abundance of tools available, Michael Fritzius, president of Arch DevOps, believes that the trend will be toward individuals simply skilling up because they want to be marketable rather than tools.

“There will be an increase in the number of manual testers who wish to go towards automation. More automation engineers will be interested in learning about the architecture of automated testing systems.”

Rather than creating the tests themselves, they’ll be in charge of overseeing and directing teams through the process. “So, they’re going to do their hardest to make it on their own,” Fritzius explained. “It’s primarily about learning how to develop software.”

7. The adoption of commercial tools will slow

Commercial tool adoption will not start up until next year at the earliest, according to Fritzius, due to the significant investment required. “It takes a long time and a lot of money.”

On average, tools cost at least $250,000. Then you have to study it and alter your methods to include it into their system, he explained.

It will take some time for businesses to be prepared to spend that much money to enhance their processes, “understanding that we might not see a payoff for a long.”

According to Paul Grizzaffi, senior automation architect at Magenic, the test automation environment will remain fragmented throughout 2021 and perhaps into 2022.

Despite the fact that new technologies, frameworks, and stacks are being developed, they are all linked to a single browser or API.

“Users will have to glue them together. Alternatively, you may purchase an additional framework or stack component to assist bring all of that together so that you can conduct multiple forms of automation with one technology if you will.”

Unit testing, functional testing, performance, load, security, integration testing, test data management, and API testing are all examples of testing, according to him.

“Clients don’t want one tool for everything, and they don’t care whether it’s the best of the breed. They want an integrated platform because they want a consistent, uniform experience as they move from one sort of testing to the next.”

Caution is the ruling force

The COVID-19 epidemic, like life in general, has thrown a monkey wrench into the test automation scene. As a result, as you assess your test automation tools and capabilities this year, it’s critical that you analyze these trends before investing time and money in anything new.