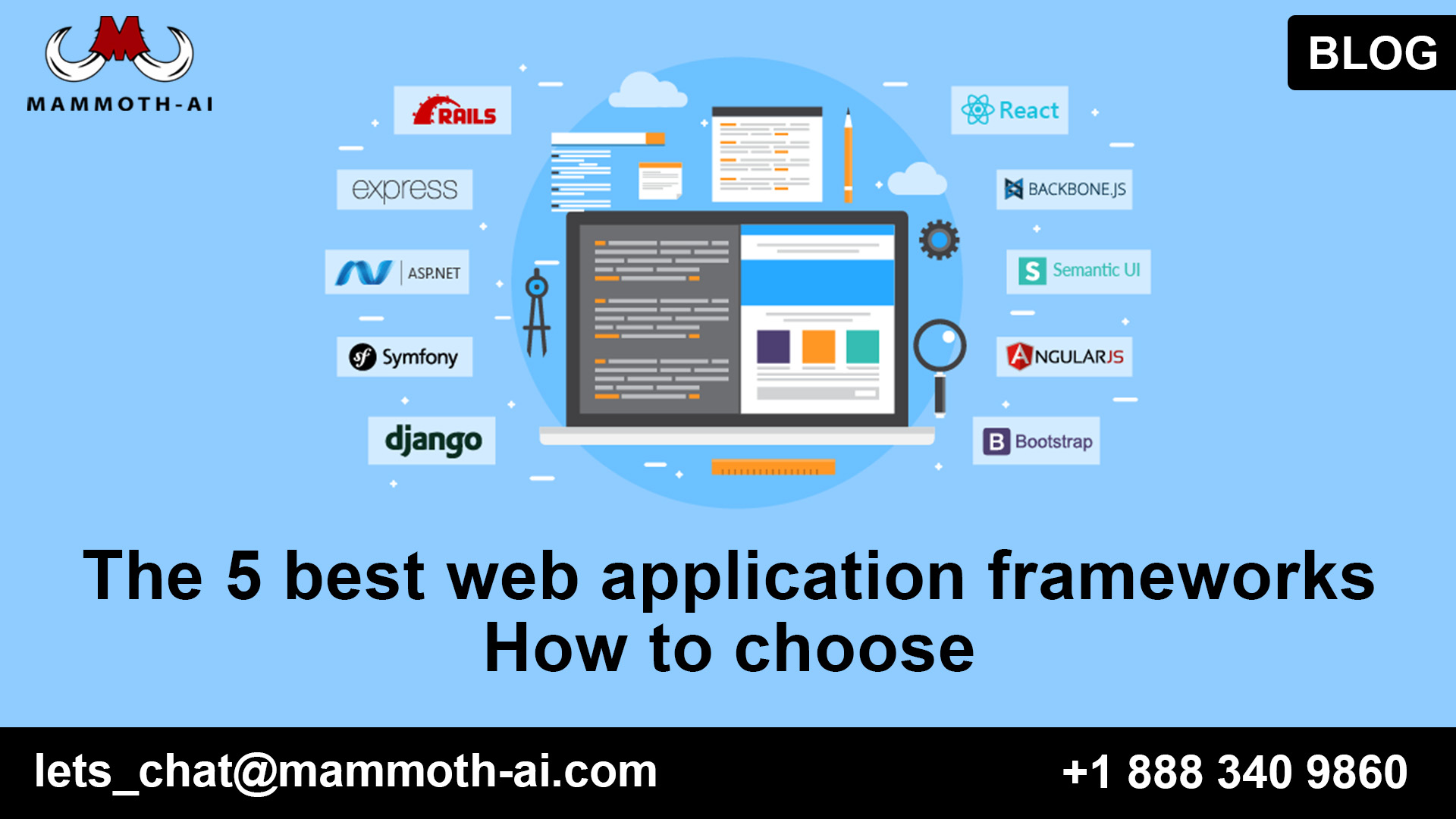 The desire for teams to quickly provide software that can scale and evolve to meet client needs has never been higher as application development evolves.

The work for the layout, logic, and application is done in these frameworks. JavaScript, CSS, HTML, and other web-standard technologies are required for these browser-based systems.

So, how do you pick the right framework for you? Based on my observations and experiences, here are the top five frameworks used by development teams, as well as what you need to know about them.

The best support for open standards like HTML, CSS, and JavaScript is a competition among web browsers. Testing if technologies function across different web browsers requires far less effort. The following are the five frameworks to think about:

The following reviews are based on my and my teams’ experiences. (If you have any opinions based on your own experiences, please share them in the comments section below.)

Angular has the longest history of any of the apps on this list. It was first developed by Google in 2010 and then distributed as an open-source project. The framework is updated on a regular basis, with major releases occurring every six to nine months. Version 9.1 is the most recent major release.

Angular has a large development community. The Angular development documentation on the site is good, and there are many terrific how-to videos on YouTube to get you started as a developer.

Angular is also evolving to satisfy the needs of web developers. For that purpose, the framework supports the TypeScript language (a superset of JavaScript), as well as the M-V-C (model view controller) architecture and a progressive web app architecture for multi-format solutions.

The MEAN development stack, which includes MongoDB, ExpressJS, Angular, and NodeJS, is incomplete without Angular.

The fact that Angular is so old can be a concern. Because developers weren’t building mobile web apps in 2010, enhancements were crammed into Angular to suit them for several years. Angular 4 was published in 2016 after being rewritten in TypeScript. AngularJS, the initial version, was renamed Angular.

Regrettably, prior versions of Angular are incompatible with Angular 4’s new TypeScript version. It’s crucial to know if any section of your company has used Angular and you’re considering switching for compatibility issues.

Angular has evolved to meet the demands of current development. If you choose this way, make sure to build Angular apps with the newer Angular 4 and subsequent versions. Also, keep a watch on the Angular blog to stay up to date on the framework’s latest enhancements.

For their web apps, many development teams will use Angular or React as the foundation. Both are mature and the rationale makes sense. Both have significant communities where developers can share information and produce software that can run large web apps.

Whereas Angular used TypeScript, React makes considerable use of JavaScript. React is maintained by Facebook, as well as individual contributors and other businesses.

React is used as the front-end framework by some very large firms, including Facebook, Netflix, Dropbox, Airbnb, and Reddit. Every day, millions of people visit these websites. React has shown to be scalable and capable of meeting the needs of the most demanding online applications.

Additionally, the skills you learn for React extend to React Native, a framework that allows developers to create native apps for the iOS and Android mobile platforms.

It’s not easy to pick up React. Because the entire architecture is written in JavaScript, you’ll need to be a seasoned developer to get started with React.

React has a steep learning curve, but the end result is a modular design that can accommodate even the most demanding websites. Facebook and the open-source community continue to invest in React’s development, ensuring that your investment will pay off for years to come.

The size of the framework is a selling feature for Vue. Working on Angular provided the inspiration for Vue. Vue was released in 2014 as a slimmed-down version of Angular and has maintained a cult following since then.

You can use HTML, CSS, and JavaScript to your advantage. Vue allows you to create templates and components in the same way that ReactJS does.

Vue is a third-choice framework for many developers, behind Angular and React. As a result, the Vue community is substantially smaller, and the framework’s development is not as robust as that of other, more popular frameworks.

Ember is a framework that is relatively new to our list. It was released in 2011 with the goal of assisting you in the development of complicated web applications. It has the following features:

Ember is now used by many major and popular applications, like Apple Music, LinkedIn, and Square, thanks to these principles and constant development.

Ember is a framework that gives you a lot right out of the gate thanks to its modular architecture and hundreds of plugins. Ember-based solutions can also be converted into native apps, such as Apple Music.

Ember extends the framework with modules. As a developer, one of the most difficult tasks is determining which modules to use. Furthermore, getting started with Ember requires a learning curve.

When compared to React, Ember is rapidly maturing into a robust and stable solution for both web and native apps. Native and Angular are two of the most popular frameworks.

Svelte is a framework that opposes frameworks. Some frameworks have drawbacks, such as the need for a big codebase to run scripts. The movement to lessen the problems of some old frameworks is being led by Svelte, which was published in 2016.

For example, a simple To-Do MVP app developed with Svelte will be 3.6KB, whereas a similar app written with React will be 45KB—10 times larger.

Because of the paradigm, it utilizes to construct apps, Svelte can generate tiny apps. Other frameworks, such as the ones mentioned above, rely on the web browser to perform the majority of the work.

Svelte allows you to write components in CSS, HTML, and JavaScript, which Svelte subsequently converts into JavaScript modules. As a result, the browser does not have to work as hard. As a result, you’ll be able to create more complicated apps.

JavaScript modules are a great method to make any JavaScript application run faster. Svelte’s approach is to improve the efficiency of your apps.

Many web developers have never used JavaScript modules before. Svelte takes a radically different strategy, and the developer community is still expanding because it is a new kid on the block.

Svelte takes a unique approach to Web application development. Working with JavaScript modules has its advantages, and the paradigm offered by Svelte is one that developers should try out. Svelte, on the other hand, is light on documentation. As a result, consider Svelte to be experimental for the time being.

These frameworks were designed with web apps in mind, however, that is no longer the case. These days, back-end frameworks and accelerators play a big part in app development. (Though those subjects are outside the focus of this text, they must be acknowledged.)

Cloud, open-source technologies, DevOps approaches, and security are all important accelerators. However, your thinking is the most important accelerator in many respects. As a modern developer, you must adopt a mindset of continuous learning in order to enhance your delivery process and fulfill your clients’ ever-increasing demands.

You must be able to deliver solutions that are scalable across all of your clients’ platforms. The power of front-end, back-end, and accelerators combined will provide you the competitive advantage you require.